It has come to pass that another of our number has reached the ever glorious level 70. It is in honor of this event that a guide to gold acquisition is being written.

This one’s for you, Brian, Congratulations!

When one hits 70, they are suddenly open to a vast array of special quests called daily quests. Daily quests earn an average of 10 gold, and can be repeated once a day. Many daily quests, or “dailies” must be unlocked before they can be performed. The process to obtain these dailies usually manifests itself in the form of chain quests that are three or four quests long, although they may be fewer or greater in number.

Dailies appear on your minimap as blue exclamation marks. They aren’t to be confused with repeatable quests, characterized by blue question marks, which are able to be done as many times as one wants, and are used to generate reputation with certain factions rather than give money.

The first Daily I suggest to pick up starts as a chain quest from a Sha’Tari Skyguard representative standing beside the flight master in Shattrath City with a pet riding nether ray. This is of course, after you have purchased your first flying mount. That ability is gained from taking a quest from the flight master himself, that takes you to Wildhammer Stronghold in Shadowmoon Valley. There you purchase a flying mount and riding ability for 200 gold and 800 gold respectively, coming to a total of 1000 gold. Flying mounts are required for a great deal of dailies.

After you’ve picked up a flying mount, head back to Shattrath and look to the Skyguard mentioned above. She will give you a quest to take care of a number of ogres residing in the hills above the city. After this is done, you are directed to a place in Terokkar Forest called Blackwing Landing. You can spot the encampment by its distinctive neon glowing landing pad much like something a helicopter would land at. 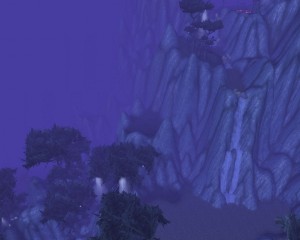 You can see in the upper right corner where the landing pad is. This area is just southeast of Allerian Stronghold in Terokkar Forest.

There, you speak to the commanding officer in charge to get a quest that becomes a daily after the first performance. You must fly your griffon to the tops of Arakkoan platforms and buildings, and drop explosive charges onto giant owl eggs. This quest can be dangerous, as Kaliri, the owls whose eggs you are bombing, are active sky sentries for the Arakkoa, If one aggroes onto you in the sky, the best thing to do is either dive towards the lake below, or to head for one of the close platforms on which the eggs rest. If you don’t, the bird will most likely dismount you by force, and you’ll be at the mercy of whatever surface you land on.

Also in the vicinity of the egg bombing daily is another quest that relocates itself to random spots every day. There is a Sha’tari Skyguard trapped in a cage in the tree-top homes of the Arakkoa. He will ask you to escort him out of the treetops and fight any guards that spawn along the way. As far as I am aware, this quest is soloable in all areas of its relocation. I have only done it once or twice before, as my main concern is usually to bomb the eggs in “Fires Over Skettis” and then high-tail it to another area to complete more dailies.

Next Issue: Blade’s Edge Mountains and the Og’rila.