After a million years of procrastination, I’ve decided to put up another character. Ironically, this is similar to my last post in that Lauren Faust is heavily connected. One of Lauren’s more mainstream-obscure side projects is called Milky Way and the Galaxy Girls. It’s basic premise if it ever makes it to television will be a series of shorts much like Star Wars: Clone Wars. Each episode would be a few minutes in length, and would be mostly music-oriented; dialogue only taking place in a couple episodes where singing is required. ANYWAY, each of the characters in this series is named, and subsequently based on, celestial bodies. In focus is the solar system. For instance, one of the characters is named Mercury. She is very sports-based because of the speed with which the planet orbits the sun. The character named the Sun is a singer, more accurately a “star.” The whole thing has a fairly well developed website at http://www.milkywayandthegalaxygirls.com/. So go read up on it there if you’re so curious. 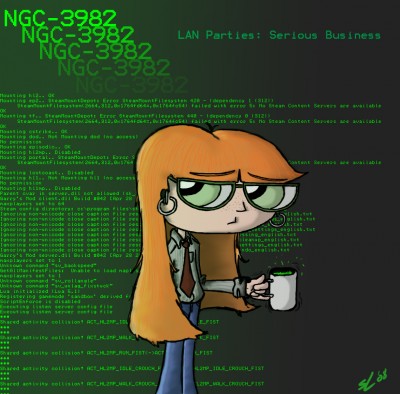 The whole reason this girl came into being is because of Lauren’s method of naming her characters. I figured “If you’re naming characters after celestial objects, what about all those countless things in the sky that have no real name?” I liked the sound of NGC-3982, a galaxy behind the big dipper, 68 million lightyears away. Since I first started drawing her, she’s become more detached from the Galaxy Girls and in my mind, and I’m certain her own, acheived complete autonomy. Her character is that of the computer-nerd/gamer/programmer. She also has some of Adam in her, and is a bit of a recluse. The closest any of Lauren’s characters came to being like her was found in Uranus. Uranus, although being highly intelligent and bookish, commands good work ethic and knows mostly usable information; thereby seperating her from NGC’s procrastinatory ways and command of useless trivia. Each character in the Galaxy Girls has a symbol that they wear in the form of earrings. I thought it fitting to have NGC-3982’s be the power switch of most electronics. She is a skilled runner of Linux and Microsoft, but like me, harbors a dislike for Macintosh. She is also a self-declared hunter of “noobs.” The developer console in the background is a section of copy-and-pasted code from the start up of Garry’s Mod. Feel free to ask me any questions about her character, since by far she is one of my most developed ones.