There is a clear sign when someone is taking World of Warcraft WAY too seriously. Many would say that it is when a person or group of people, while in a battleground, are constantly trying to orchestrate elaborate strategic attack plans over the battleground chat. It is on this that I’d like to set some concise guidelines. I am an avid supporter of the use of teamwork in a battleground, but I certainly do not take WoW that seriously. It is not the planners that are to blame. It is the planners that, when teamwork fails, constantly swear, curse, and insult everyone around them. When anyone who doesn’t follow your plan is a “f—ing idiot,” I think it is very important to log out for a while, and go do something else. The fact that anyone who presents an attack plan is almost always considered to be one of these psychos saddens me a great deal, especially since, when planning is executed correctly, victory can be quite easy to attain.

I was in a Warsong Gulch battle the other day. When the marker stated one minute to battle, I suggested over battle-chat that there be a group of volunteers for defense of the flag, and that the rest go on offense. Someone said that it was a good idea, and I quickly had a pallidan, a rogue, and another hunter helping me to keep the flagroom clear. I find that a good defensive group consists of

A) At least 2 hunters for traps and concussive shot, wing-clip, and scattershot reasons, plus tracking.

B) A healing class (Specced for healing.)

C) Druids, as they can fit any of these classes to a decent degree.

D) And a Shaman for their totems and/or a rogue for their good ambushing tactics.

In the WSG that I suggested the defensive group, we beat the Horde mercilessly for a stunning 3 to 0 victory.

Today, I was in another Warsong Gulch. This time, when I asked if there was a set of defensive volunteers, there was silence for a few seconds, followed by just one response. “Are you serious?” Instead of replying to this answer with grievous insults toward their intelligence, I responded with “Ummmm…I guess not.” I was not about to get into a huge argument over Warsong Gulch tactics with this person, especially because I knew that from their initial reply alone they had absolutely no intention of following any ideas I had, no matter how persuasive an argument I provided. There was 30 seconds to show time and I simply said “We’ll just wing it then. :P .” The following battle was like something out of the Leeroy Jenkins video. The Horde destroyed us with the usual 0 to 3 win on their part. It would have even been better if the Horde had a plan of their own, but apparently they didn’t, as I picked up their flag three times, and each time no one was defending it. The only reason I didn’t make it back was because none of my comrades even tried to heal me as the enemy players closed in on all sides. I actually saw a priest ride up in front of me when I had less than half-health, fully shielded yet still with mana, and they attacked another Horde player far behind me with a smite instead of trying to heal me or sheild me. While any addict of WoW would be screaming until they were blue in the mouth, I simply took it as a disappointing turn of events.

When losing a battleground, I’ll sometimes say something like “dang” or “better luck next time guys.” I always try to remember that it is a GAME. I can get annoyed, I can be irritated with the behavior of others, but I’m fairly certain that my life does not actually hang in the balance. I just wish that the people who assume planners are irrational addicts could see that it is actually because of them that planning often goes bad for alliance. It is the people stating “Are you serious?” that cause others to say the same thing time and time again. It is a sad and disappointing cycle. World of Warcraft may just be a game, but that doesn’t mean we have to suck at it. We can have teamwork and still be totally rational about it.

I don’t think that Alliance can’t win at any battleground. I know it is simply a matter of happening to land in a battleground with the right people. If I may paraphrase Jerry Seinfeld, “Battleground’s a gamble. I know that going in.” So don’t get upset with people who refuse to follow tactical suggestion, as becoming upset with them will simply perpetuate the problem. Take it as a game, and simply try again with another group in the next battle. Unlike real life, there’s always another battle. 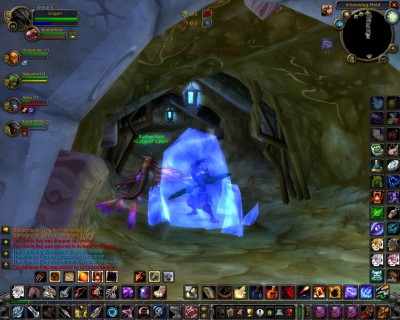 Owenkris proves that they need to take a break from World of Warcraft to the point that they can barely maintain coherency while typing.