The simplest way to run two instances of WoW

Brian had mentioned on more than one occasion the practice of “multiboxing” which as best as I can define: a single user running two ore more World of Warcraft accounts at the same time.

I had always precieved that there was a certain level of complexity to operating two machines at the same time (multiple keyboards/mice, using KVM, etc.) however, it’s really quite simple:

Now the final ingredient to this recipe is my trusty 1st-generation G15 keyboard:

Equipped with a gratuitous 18(!) macro keys (which was later revised to a manageable 6 in the second revision), setting ready-made commands up is a snap: 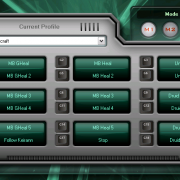 For this demonstration, my “slave” account is my wife’s level 62 priest who makes a good heal-bot

The basic multiboxing strategy is as follows:

Note that during battle, healers need to be standing still to get their heals cast, so be sure to use the “stop follow” command

So the layout for a priest command set on the G15 would go something like this:

This layout resides in memory set one (M1) on my keyboard its purpose is for soloing with the multibox slave assisting the master.

Set 2’s (M2) macro layout focuses on full party play such as instances or group quests by switching up the layout to cover heals/buffs for up to five party members Note the use of two major spells in columnar format:

Note that the importance of the Start/Stop Following Master commands is not to be underestimated! To avoid interrupting healing spells during cast, the slave needs to be stationary. Forcing the master to remember to hold still during critical healing moments is not an effective way to go about it, quickly “parking” the healer with the “Stop Following” (Alt+Tab, down arrow, Alt+Tab) command resolves this.