I’m entering a period where I am getting tired of playing PC games. This last happened for me about 2004, and didn’t recover until mid 2007. Since I’ve stopped playing World of Warcraft in March, I’ve been experimenting with various games. I’ve played Borderlands, GTA IV, Left 4 Dead 1/2, Dead Space, Garry’s Mod, Dragon Age, and Portal. They are mostly fun games, to be sure, but I haven’t been having that much fun. One of the reasons I stopped gaming in 2004 was because the games then didn’t seem to have something new to offer. Yes the graphics were better, but was UT 2003 more enjoyable than the original? Not really.

At present I am starting to notice this happen again with the current crop of titles, and there have been some issues that, well, just piss me off. $59 dollars for a new game? Come on. Flaky DRM schemes and installation limits? Fine, treat me like a criminal. Piss-poor ports of console games at full price and months late? Oh, you must think I have no choice in the matter… That being said, I’m not abandoning PC gaming or anything. It’s just that for me, the benefits bar is slipping, and the hassle bar is rising quickly.

As this post title indicates, I think that board games might help fill the gap in PC gaming. I want to play something that is engaging, fun, and has complexity. It should be social, and if I play badly I want to daydream about how I will do better next time… There is a lot to like about a good board game:

They aren’t perfect though. Two player board games usually aren’t that fun, and some times you have too many people or an odd number of people. Still, they can be simpler affairs than LAN’s, and just as much fun.

So here’s what I’m thinking. Sometime in the next few months, I would like to host a board game night at my house. The basic format would be dinner, the game, and optionally a movie (or another round or game). I’m looking for a minimum of three players, with a max of six. Google bots are not invited, even if they have been faithful readers of this blog.

As for the game, I’ve listed three possibilities below. I do not own any of these, but would purchase the one to be played, unless it could be provided by someone else. I will take suggestions for other games as well, but if you suggest scrabble you are not grasping my point :) I played this a number of times in college, and it never failed to please. I think I’ve played the three main variations, including Europe and Pacific theatres.

The Settlers of Catan

I’ve never played this game, but it looks intriguing. Looking at the wikipedia page, it sounds a lot like Civilization for PC, which I love, but incidentally hate because it can take ten hours to finish a game! 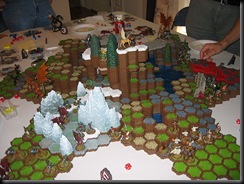 I haven’t played this game either. I really like the idea of an RPG/D&D style board game. I played one as a teenager called Hero Quest but it is out of print, and full versions now go for over a hundred bucks! One thing that might not be so great about it is that there seems to be a lot of “add-ons” for this game, which screams money pit. I did see that you can buy a “master set” for under $40, and if this could provide several evenings of entertainment it may be worth it.