A few months back I posted about wanting to try some board games, and getting a board game night together. A lot has happened since then, including the purchase of an Xbox 360 (a topic for another day), but I’m pleased to say I’ve finally got my hands on a board game I want to play. Enter DungeonQuest.

In DungeonQuest, the goal is to explore the dungeon/lair of a dragon in search of treasure, and get out with the loot before you get killed. The dungeon is different every time, so no two games can be alike. You can play solo or with four people total, in a quasi-co-op mode. Many of the traditional RPG elements are present, but the gameplay is different than what I’m used to. First, there is no GM. Players control any monsters that appear when they are not playing their own turn. Next, while dice are used for certain checks, encounters and combat are completely card-oriented. There are a *lot* of cards with this game, you definitely want to keep them organized. While you get to choose from six heroes with different powers, what a hero is able to do is largely determined by the shared combat deck. Yes, the wizard will cast spells, but is oddly quite handy with a battle-axe.

I decided to play my first game solo, to get an idea of the rules and play style. There is quite a bit of setup involved, and the learning curve is about medium, but I think it will be easy if you have someone showing you the ropes the first time you play. My first game took about two hours, but I was also poring over every single move and rule as I went along. Sadly I died without making it out, but these things happen in dragon lairs. 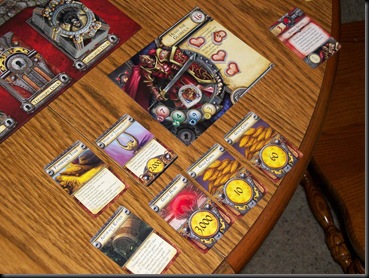 I think I can say that this is going to be a fun game for 2-4 players. Someone with a lot of time on their hands might enjoy the single player game, but frankly it seems like a lot of work. Most of the fun is going to see what befalls other players, and getting to fight them with monsters you happen to be running. Another real problem with single player is that there is precious little dungeon explored. I ended up getting stuck in a long dead-end, and wasn’t able to make it out before time ran out!. I imagine the board will be covered with tiles in multiplayer games so that wouldn’t be a problem then.

So, all I need to do is set up a game night! I’ll probably send some stuff out on twitter in the next week or so. I’ll play a few two-player games by then (with my wife) to get an even better feel for the rules.

For more info on the game see: http://boardgamegeek.com/boardgame/71061/dungeonquest